10 things that matter to the global speaker, UNESCO Geoscience Chair and BBC Presenter: making science documentaries, being an earth science champion and Scotland beating Wales (just once!) at the rugby. 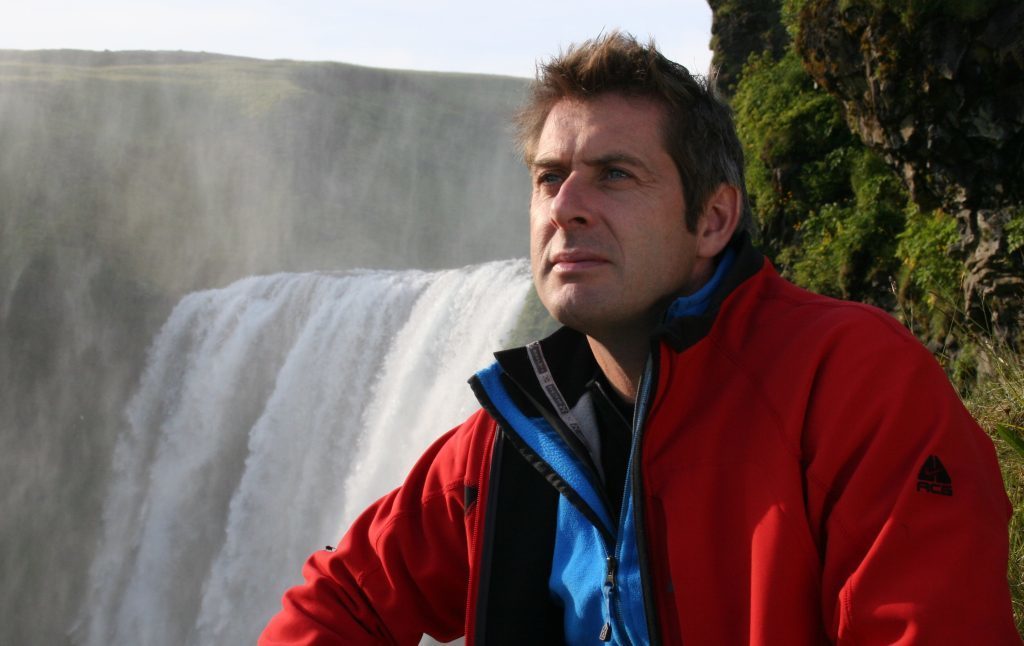 Chair of Geoscience communication – that’s not a title you hear every day. Is this what you set out to move towards or is it something you fell in to because you’re naturally a good communicator?

The role came about quite naturally – the consequence of juggling my academic research interests in abrupt geological change (earthquakes, volcanoes, etc) with popular broadcasting about the planet with BBC Television. Combining the two to integrate more media-savvy communications into effective messaging of global planetary issues seemed the obvious solution. It meant that all my PhD research students were working on communication issues around energy, resources, hazards and the environment and were joint interdisciplinary collaborations with social scientists and media professionals.

Scientists haven’t always been great at communicating their ideas with the wider public – what advice would you give to early years researchers who are developing their skills in this area?

I think the main problem we face is that we’ve been trained to be technical experts and so regard that technical information and understanding as the key to providing people with solution. However, most people’s concerns about environmental issues are not about the basic science but more about ethics and values, about inherent uncertainties, and about issues of trust. For me, the key in communication is to switch our mindset from communicating ‘matters of fact’ to developing dialogues around ‘matters of concern’.

Tell us about what audience members in Cardiff can expect in your talk – also, will you be taking in any of Wales’ fine landscapes while you’re here? It’s a Geologist’s paradise down on the Glamorgan’s heritage coast!

Yes, the geology and landscape of Wales, and the Glamorgan coast in particular, is exceptional and we regularly bring our students there on fieldwork. But if you’re not a geologist it is easy to see these rocks as just 50 shades of grey. Geo-sado-masochism in a way, especially on a wind-swept, rainy day! So it’s about bringing out the stories of what the strata mean – the ancient tales they tell – that becomes the critical part. I found that most geologists are pretty good at that.

Welsh Government announced a climate emergency in April and scrapped a multi-million-pound M4 relief road which would have generated millions for the economy, citing environmental concerns. Wales has also adopted a Future Generations Commissioner to safeguard the interests and wellbeing of future generations in all legislation in Wales – is this something other countries can/should adopt and is it enough?

There is a real sense of change in the air – as if a tipping point in public opinion and political well as been passed. Ironically, although it’s based on sound science, most of the most effective advocates have been from civil society, faith groups and the media – Greta Thunberg and David Attenborough. The challenge is for us to maintain the momentum of change whilst making sure that we evolve an equitable transition in our energy and resource needs so that the climate rush doesn’t have a social backlash. That’s going to require scientists to enter the fray more than they have done so far.

What are the most pressing issues you foresee in the next few years in terms of the climate emergency and how we harness public interest and engagement to get them to take action?

For me it is the need for a coherent energy policy that provides a clear roadmap for weaning ourselves off fossil fuels transitioning over to the renewables and appreciating the shortfall that may require us to resort to more dramatic interventions, such as carbon capture and storage technologies that can produce long-term carbon reductions.

Most people I talk to like simple solutions but for me the energy portfolio is going to have to be very mixed and will probably include some unpalatable choices. Public engagement is going to be focused on making sure that there is widespread social acceptance for the changes that are coming and ensuring that the public remains on board.

Your TV credits are incredible – what other TV projects are you working on at the moment and when can we tune in to see you next?

For me, the last 15 years have see-sawed between the media and academia, and the last couple have seen me focus increasing attention on the latter. I feel that I’ve had this amazing apprenticeship in popular communication, and that my role now is to translate that into the scientific world – developing and training the next generation of media-smart scientific communicators. I’m keeping my hand in with the odd bit of filming and with advising on popular Earth science programmes for the BBC, but the challenges of running my own research institute at Plymouth (the Sustainable earth institute) is limiting that a bit.

I’m really getting interested in the cultural and psychological aspects of how ordinary people ‘see’ the geological subsurface. It’s an environment that lies out of sight, and for which they often have no formal education, and yet increasingly they are having to make decisions on how we exploit ‘the land below ground’. It a wonderful area for innovative interdisciplinary research, and one that is ripe for exploring with emerging technologies such as Virtual Reality visualisations. So that’s the kind of research I’m trying to build at the Institute.

Well, in a media context, Attenborough for sure – for me is the role model to which any science presenter needs to measure up to, particularly with regard to his honesty and integrity.  But from a scientific perspective I’m always drawn to those fearless polymath scientists that passionately explore a whole variety of different questions and don’t get bogged down in the minutiae. It’s important, of course, that others do care about the detail, but my experience with television science is that there’s something wonderful in revelling in the breadth of scientific endeavour and knowledge.

I think it is just surviving for 15 years making top-level mainstream science documentaries. Most people get a short window of opportunity, such is the fickle nature of television and the public’s appetite for presenters. In a way it’s why I always kept the day job, which had the added value of being a pipeline of new ideas from my geology colleagues.

But that sense of being recognised as a champion for Earth science, here and abroad, is a wonderful culmination of all the fun that I’ve had.

For Scotland to win – just once – at the Principality Stadium with the roof on!

This site uses Akismet to reduce spam. Learn how your comment data is processed.

Signup to our newsletter to receive the latest news